Collect: O God, who wonderfully created, and yet more wonderfully restored, the dignity of human nature: Grant that we may share the divine life of him who humbled himself to share our humanity, your Son Jesus Christ; who lives and reigns with you, in the unity of the Holy Spirit, one God, for ever and ever. Amen.

When Jesus arrived, he found that Lazarus had already been in the tomb for four days. Now Bethany was near Jerusalem, some two miles away, and many of the Jews had come to Martha and Mary to console them about their brother. When Martha heard that Jesus was coming, she went and met him, while Mary stayed at home. Martha said to Jesus, ‘Lord, if you had been here, my brother would not have died. But even now I know that God will give you whatever you ask of him.’ Jesus said to her, ‘Your brother will rise again.’ Martha said to him, ‘I know that he will rise again in the resurrection on the last day.’ Jesus said to her, ‘I am the resurrection and the life. Those who believe in me, even though they die, will live, and everyone who lives and believes in me will never die. Do you believe this?’ She said to him, ‘Yes, Lord, I believe that you are the Messiah, the Son of God, the one coming into the world.’

Then Jesus, again greatly disturbed, came to the tomb. It was a cave, and a stone was lying against it. Jesus said, ‘Take away the stone.’ Martha, the sister of the dead man, said to him, ‘Lord, already there is a stench because he has been dead for four days.’ Jesus said to her, ‘Did I not tell you that if you believed, you would see the glory of God?’ So they took away the stone. And Jesus looked upwards and said, ‘Father, I thank you for having heard me. I knew that you always hear me, but I have said this for the sake of the crowd standing here, so that they may believe that you sent me.’ When he had said this, he cried with a loud voice, ‘Lazarus, come out!’ The dead man came out, his hands and feet bound with strips of cloth, and his face wrapped in a cloth. Jesus said to them, ‘Unbind him, and let him go.’

So here we are again. We are delayed today because we have icy roads, and the schools are opening late. I am actually glad. We are now 5 times higher on the infection rate that shut us down not even a year ago. There are more cases now than at the worst of the last year and a half. I trust that it will be no surprise when we have to make the call to suspend in-person gatherings for a time.

And here we are contemplating resurrection. I wish we could be like Lazarus, and despite our stink, despite what appears to be our imminent demise, despite all the fuss, we could have the stone rolled back, and we could hear Jesus words commanding, “Unbind them, and let them go!”

Now Lazarus did nothing to make this happen, he had just been faithful in what he was responsible for, caring for his sisters and responding to Jesus’ teachings about his way of loving and following and serving God.

Jesus considered him and his sisters friends. And Jesus even wept at the word that Lazarus had died.

I think on the things that I do or that I left undone that brings Jesus to tears.

Resurrection is rare biblically, with only a few examples ever mentioned. But one thing that is throughout Scripture is that even in the worst of times, in times of war, or famine, or death, God prevails. A righteous remnant always is saved and left to carry on the faith in the living God. Think on Noah, the prophets, the Babylonian Exile. God always finds a way around the horror and the heartbreak. And even when they attempt to kill the very God that saves the righteous remnant, even there, we are give a Resurrected Lord. 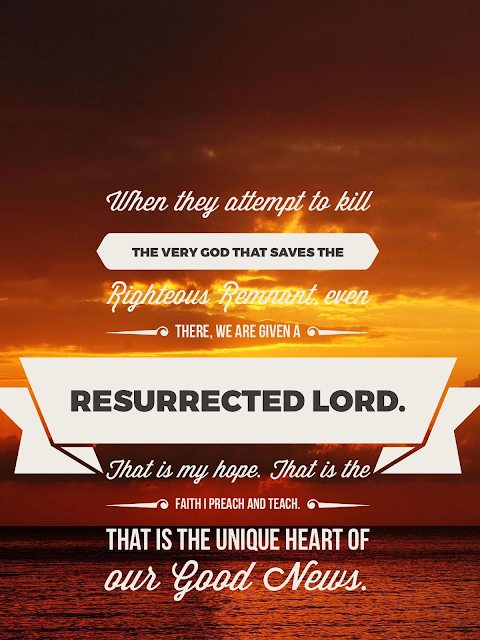 In these dark days, hold onto that light. Hold onto that Hope. That is the heartbeat of Lazarus, and may it be ours as well.

Have Hope. Fear Not. Amen