Collect: Give us grace, O Lord, to answer readily the call of our Savior Jesus Christ and proclaim to all people the Good News of his salvation, that we and the whole world may perceive the glory of his marvelous works; who lives and reigns with you and the Holy Spirit, one God, for ever and ever. Amen.

Jesus, filled with the power of the Spirit, returned to Galilee, and a report about him spread through all the surrounding country. He began to teach in their synagogues and was praised by everyone.

When he came to Nazareth, where he had been brought up, he went to the synagogue on the sabbath day, as was his custom. He stood up to read, and the scroll of the prophet Isaiah was given to him. He unrolled the scroll and found the place where it was written:

And he rolled up the scroll, gave it back to the attendant, and sat down. The eyes of all in the synagogue were fixed on him. Then he began to say to them, "Today this scripture has been fulfilled in your hearing."

Good morning, we see a powerful story of Jesus today, proclaiming that the Scripture is fulfilled in their hearing. “Hometown Boy Makes Good!” could be the headline. But it all depended on how people perceived Jesus. Just like with us, how people see and experience something says as much about them, if not more so, than what happened.

This comes out in how people respond, and is summed up in the phrase, “Feedback says more about the giver than the recipient.”

Jesus, seen as just Joseph and Mary’s boy, had been out and about in Galilee, and his newfound popularity had preceded him to Nazareth. When he came home, he was given the honor to read the Scripture in the synagogue on the Sabbath, and he chose the passage from Isaiah:

This is what today we would call Isaiah 61:1-2. He rolls up the scroll, and sits down. Everyone was watching him, explicitly it states, “All eyes were fixed upon him.” And he declares then that the Scripture had been fulfilled.

We may see it as a nice and sweet Sunday School, “Yeah! Jesus is Good! God’s in his heaven and all-is-right with the world!” moment. But we may see it that way because we stop it at that point in the lectionary reading.

He goes on to say that:

24 “Truly I tell you, no prophet is accepted in the prophet’s hometown. 25 But the truth is, there were many widows in Israel in the time of Elijah, when the heaven was shut up three years and six months, and there was a severe famine over all the land; 26 yet Elijah was sent to none of them except to a widow at Zarephath in Sidon. 27 There were also many lepers in Israel in the time of the prophet Elisha, and none of them was cleansed except Naaman the Syrian.”

No prophet is accepted in their hometown. It makes sense. It is hard to break free of people’s preconceived notions. I remember once my mother wondered if I might be interested in applying to be the pastor of my home church in Newport News. Jesus’ line came to mind when I responded to her, “No one should ever pastor a church where people in the pews changed their diapers.”

Once people have an idea of who you are, it is nigh impossible for them to take you out of the category they have placed you in. We have all been there, when someone who knew us at one point in our lives could not let go of that view of us.

And the same was true for Jesus. They saw the boy that they knew. It would take a major rewrite in the collective consciousness for them to see him, no matter his reputation as anything else. And their response, once not one of Epiphany, “Of course, this one we knew was the long-awaited Messiah!” Their response was one of judgment and outrage, outrage which led to violence. Quoting Luke 4 again:

28 When they heard this, all in the synagogue were filled with rage. 29 They got up, drove him out of the town, and led him to the brow of the hill on which their town was built, so that they might hurl him off the cliff. 30 But he passed through the midst of them and went on his way.

I have stood in Nazareth, supposedly in the room that claims to be the site of the original synagogue where Jesus proclaimed these words. As soon as I could get free from the close pedestrian only streets I looked around for the nearest cliff from which this story continued.

If Jesus, as good as he was, can be a victim of pre-judging, that is prejudice, what hopes do any of us have?

One of the key shifts that those of us who claim to live lives of grace and truth must make is to let go of our pre-judging that seems innate all too often, and see things as they are instead of the lazy assumptions that what we used to know to be the truth.

What if Nazareth had heard the words that Jesus said, and actually embraced the truth he shared? How might all their lives have been different?

One of the great transitions that we, as followers of the Christ, needs to be is to shift how we see all of God’s Children. We need to let go of our preconceived notions, of the scripts our culture, or our background, or our experience place on us. We need to see with Jesus’ eyes, with Jesus’ heart.

Jesus instructs us to love our enemies, and the only way I have ever been able to do that (when I have) is to stop seeing them as enemies. And once I have stopped seeing them as enemies, guess what? They are no longer enemies. Now, I might be theirs, but I have a choice on how I see them, and as I treat people with grace and love MAYBE they will stop seeing me as an enemy, too. If someone sees me as an enemy, why on earth would I ever let them have the power to control how I respond to them. That is how we “turn the other cheek” and “do good to those who hate [us.]”

In our day and age, when everything seems to become political and divisive, we have taken on a habit that only seems to get worse and worse. I have found myself reveling in it as well. The term applied to it is actually German, as we do not have any common equivalent in English. SCHADENFREUDE, delighting in or finding joy in someone else’s pain. That could be physical or emotional pain. And if I find myself doing that deep-throated gutteral laugh, hea-hea-hea-hea-hea, I stop and remind myself, no matter who they are, they are a beloved child of God and a brother or sister. A fellow Son of Adam or Daughter of Eve as C.S. Lewis put it in the Chronicles of Narnia.

Brené Brown, in her wonderful new book, Atlas of the Heart, speaks on naming emotions. When it comes to Schadenfreude, Brown admits she struggles with this as we all do in our time. She, I am proud to say, is a fellow Episcopalian, and says when she feels this feeling coming up that she reminds herself, “Nothing that celebrates the humiliation or pain of another builds lasting connection.” Either with the person being pained, or the group celebrating the pain of another. She cites a Ted Lasso  episode where he declares his office a Schadenfreude-free zone. I need to declare my heart this way, too. 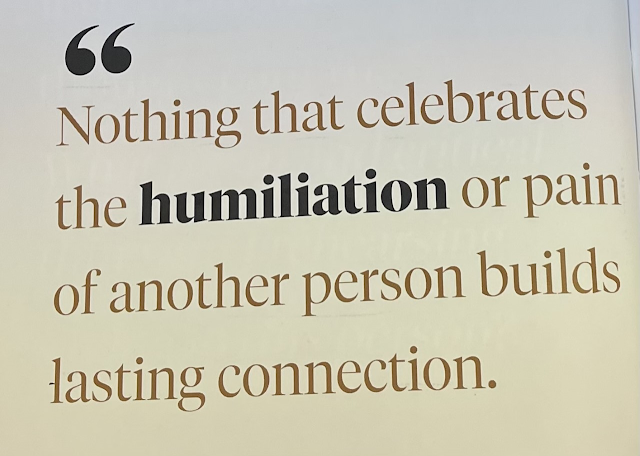 None of this is easy, and Jesus commands us this act this way because we would never be able to go there on our own, we may not even be able to think that way without his help.

What would our world look like if we shifted more to the understanding that everyone we meet is a beloved Child of God? A person adored and desired to be in a relationship with the Almighty, just like every one of us?

This is that letting-go-of-our-assumptions, this removing-of-the-scales-on-our-eyes, that I am speaking about.

When our assumptions are not released, we could be like the Nazarenes and try to throw Jesus off a cliff. Or we can have our assumptions transformed, and we can begin to see the world that is. And if we do that, we too can fulfill the promises of Isaiah and Jesus both.

When we release our prejudices, the Year of the Lord’s favor has already begun! Amen