Here is a short presentation I made for Coffee and Conversation at St. Thomas'.  Blessings!
https://prezi.com/v5inrwwej-wv/shrove-tuesday-ash-wednesday/
Posted by The Rev. Rock Higgins at Tuesday, February 17, 2015 No comments:

One Year Later, and a Long Time More

I have been overwhelmed by the outpouring of love and support on the Anniversary of my priesting on February 8.  It was a Sunday, so I got applause at my church a couple of times.  I got to baptize a student from school, preach and celebrate.  It was a pretty awesome day.

I put up a picture of a year ago on Facebook, and got over 130 likes on the picture, and several comments.  What was most meaningful about that was the many, many friends from all through my life that were affirming my call.  Jewish, Buddhist, Mormon, Baptist, and Nones threw in their love, and even a few Episcopalians from my church and around the Diocese.  I even got a like from the Bishop of the Rift Valley in Africa.

Today, I bumped into an old friend I knew from my seminary days.  He asked what was new, and I shared my anniversary with him.  "Yeah, I have been a priest a year," I said.  "Oh, you've been one a lot longer than that," he said.  And I have.  He was right.  This long journey has taken many a circuitous route along the way.  I am blessed and I could not be more excited about what the future holds.  Thanks be to God! 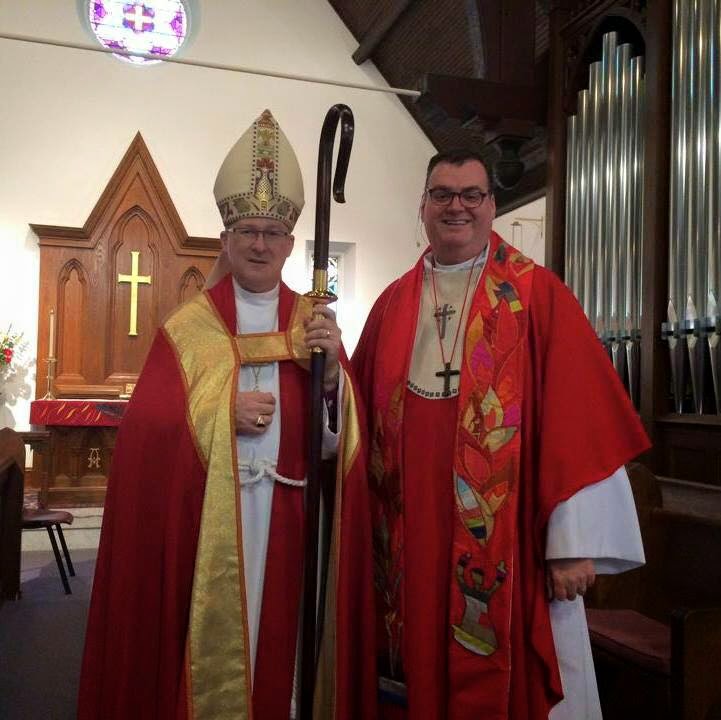 Email ThisBlogThis!Share to TwitterShare to FacebookShare to Pinterest
Labels: Commentary


First things first.  It is easy to say.  So much harder to do.  One of the big issues in life is deciding, and the spiritual term is discerning, what it is that we are to be about.  In the days we live in, discerning what comes first is the greatest struggle for all of us.


If you think about it, it is one thing that we all have in common.  We say in this country that we are all created equal, but in most accountings we could prove that untrue.  Rank, status, wealth, talents, none of these are distributed equally.  But time is the one thing which we all have in equal distribution.  We each are given 24 hours in a day, and seven days in a week.  What we choose to do with this gift, what we discern about the spending of our days, is what will make us who people remember us to be.


I had the honor to be at the funeral of the most senior priest in the Diocese of Virginia yesterday.  The Reverend Harry Baldwin lived to be 95 years old, and loved being a priest so much that he had 5 retirements because he kept getting back in the game.  Bishop Jones spoke of his great love of Jesus and of his wanting to affect the spiritual life of his flock.  It was said of Mr. Baldwin that when he visited people in the hospital, that people felt the palpable presence of God, especially when he laid hands on them in prayer.  What a wonderful remembrance.  Mr. Baldwin kept his first things first.


Now as we explore today’s theme, you are not going to hear me talking about things that you should not do.  You are not going to hear me talk about the sins that linger on, or the distractions that keep us from our goals.  I think about those things, most of us know what not to do, but the hard thing is knowing what good things we are going to say no to.  Discerning what good we need to let go of is unbelievably hard.


St. Paul, in today’s reading, is wrestling with his call.  He is so driven by his call, it is all-consuming.
I Corinthians 9:19 For though I am free with respect to all, I have made myself a slave to all, so that I might win more of them.  20 To the Jews I became as a Jew, in order to win Jews. To those under the law I became as one under the law (though I myself am not under the law) so that I might win those under the law.  21 To those outside the law I became as one outside the law (though I am not free from God's law but am under Christ's law) so that I might win those outside the law.  22 To the weak I became weak, so that I might win the weak. I have become all things to all people, that I might by all means save some.  23 I do it all for the sake of the gospel, so that I may share in its blessings. (NRSV)
“I have become all things to all people that I by all means save some.”  Paul wrestled with finding ways to connect with all he met, Jews, Greeks, slaves, free, trying to find ways to point them toward Christ.  His burden and one aim was to connect all with this one of whom he had at one time, with equal fervor I might add, wipe out all memory.  Did his one driving passion come from guilt? Some may think so, but I tend to think it was out of overwhelming love for the one who opened his eyes.


Passion can make up for many ills.  But woven through Paul’s convoluted argument is the single thread of reaching out to all in whatever way he could so that he could reach some.  He kept his first things first.  All else was trivia at best, distraction at worst.


In our Gospel reading, we bounce through four mini-stories.


1) Jesus shows up at Simon’s house and his mother-in-law is sick.  He heals her and gets dinner out of it.
2) Many sick are brought to Jesus; he heals them and casts out demons.  His fame and reputation grow.
3) He sneaks off at dawn to pray and be alone.
4) His disciples hunt him down, find him and try to drag him back because the crowd was looking for him.  He does not go.


We could explore so much in this: but I want to live up to my theme and keep the first things first.  We are going to look at 3 and 4.
Mark 1:35 In the morning, while it was still very dark, he got up and went out to a deserted place, and there he prayed.
36 And Simon and his companions hunted for him.  37 When they found him, they said to him, "Everyone is searching for you."38 He answered, "Let us go on to the neighboring towns, so that I may proclaim the message there also; for that is what I came out to do." 39 And he went throughout Galilee, proclaiming the message in their synagogues and casting out demons. (NRSV)
What can we as a church look to in this passage about how we are Christ followers, instead of just naming ourselves Christians?


I would argue that we need to do less.  And of that less, we need to do what we do better.
35 In the morning, while it was still very dark, he got up and went out to a deserted place, and there he prayed.
This is one of the great reversals of the Christian life.  “Don’t just do something, STAND THERE!”  Or better yet, KNEEL THERE!  It has been said another way, “We are too busy not to pray.”  Jesus knew this.  He was about spiritual work and in order to do that, he needed to recharge his spiritual batteries.


When I got my car, I knew that I was going to be doing significantly more driving as a priest than I did as a teacher.  Because of that we decided that it would be to our benefit to get a hybrid.  Finding a hybrid that I fit in was not going to be easy, but we did.  One of the fun things about the car is that there are multiple screens that I can choose for the dashboard.  The one I have up is one that shows the energy usage in real time.  I can see when the car is running on battery power, on its itty-bitty engine, or a combination of the two.  Going down a hill is almost always battery alone.  Going up a hill is almost always engine.  But, how I drive varies the usage drastically.  If I speed off at a green light, I use a lot more gas.  If I crank the heat or the AC, I use a lot more gas.  The more I ask of the car, the more gas I use.  But after having the car almost a year, I have learned a new discipline.  How to move off from green lights, how and when to run the appliances in the car, from all these I can maximize the efficiency of the energy going out.  But even then, I have to expect charging up those batteries the best I can so that I can use them all the more and go further.


This week I was in the office, and Susan called me over.  We had brainstormed some wonderful offerings for Lent, and when we put them all on the calendar something was very clear.  Something had to go.  There is such a thing as too much wonderful.  I was glad to hear her say it what I was thinking.  We need to do less.


And why do we need to do less?  So we can have the energy to be about the things that are of the highest priority.  We need to put first things first.


Jesus discerned between the good: casting out demons and healing folks, and his calling: to share his message as far as he could.


And what else?  What of our days and hours?  If we say yes to some things, we must say no to others.  It would be so sad if we were to say yes to thing that keeps us from doing what we were born to do.


We do many things as St. Thomas’.  They are all, mostly, good.  But are we missing the mark by stretching beyond what is most necessary to be who God is calling us to be in Ginter Park, in Richmond, in Virginia?  We will need to say no to some very good things to be about the things that are why God has us situated right here, right now.
Posted by The Rev. Rock Higgins at Sunday, February 08, 2015 No comments: