Collect: Almighty and everlasting God, increase in us the gifts of faith, hope, and charity; and, that we may obtain what you promise, make us love what you command; through Jesus Christ our Lord, who lives and reigns with you and the Holy Spirit, one God, for ever and ever. Amen.

Jesus and his disciples came to Jericho. As he and his disciples and a large crowd were leaving Jericho, Bartimaeus son of Timaeus, a blind beggar, was sitting by the roadside. When he heard that it was Jesus of Nazareth, he began to shout out and say, “Jesus, Son of David, have mercy on me!” Many sternly ordered him to be quiet, but he cried out even more loudly, “Son of David, have mercy on me!” Jesus stood still and said, “Call him here.” And they called the blind man, saying to him, “Take heart; get up, he is calling you.” So throwing off his cloak, he sprang up and came to Jesus. Then Jesus said to him, “What do you want me to do for you?” The blind man said to him, “My teacher, let me see again.” Jesus said to him, “Go; your faith has made you well.” Immediately he regained his sight and followed him on the way.

What is the role that faith plays in your life? How do you use your faith?

I often do not think of our faith that way, as an external thing, a tool I use, at least I do not. My faith is so interwoven into my identity that it is hard for me to visualize.

Recently a dear child game me a gift they made, with the words, “...to help you remember Jesus.” My own child said later, “Like you need more of that.” I do have an office full of reminders of Jesus, momentos attesting to my faith. But that is not my faith. My faith is internal. My faith is key to how I view the world, the people in it, and myself. At least it is when I am at my best.

Jesus is confronted with this man so insignificant that we are not even given his name. Bartimaeus, son of Timeus. His name literally means Son of Timeus. Bar is son in Aramaic, like Bar Mitzvah is Son of the Law; Bat meaning daughter. Ben is the Hebrew. They are interchangeable.

So this pathetic, nameless blind guy hears that Jesus is passing by on the road out of Jericho. But nothing would get in his way. I am sure he was shushed, ignored, overlooked, just as he often was. It is human nature, if we do not acknowledge those things that get in the way or are troublesome they seem not to exist. He was “sternly ordered to be quiet,” but that just caused him to shout all the more.

He cries out. He has nothing to lose. He has everything to gain.

Jesus asks for him to be brought to him, and those who were “sterning ordering” his silence, now say “Take heart; get up, he is calling you.” Baritimeus springs up. His chance is here. Jesus asks of Bartimaeus, “What do you want me to do for you?”

What would you say to Jesus if he asked you that?

What would your faith allow?

A few weeks ago, my family and I went to see a show we had been wanting to see in New York City. It just so happened that our first morning there the cast was on Good Morning America in Times Square, and we got up early to go and see them. It was wonderful. After they performed, everyone was packing up, and the star of the show was standing there. I told the kids to follow me, and walked up to him. There was just a metal police barricade between him and the sidewalk. So I just blurted out, “Mr. DeShields, can we get your autograph?” The worst he could say was no. But he was very kind, asking where we were from, and such. I told him we were going to the show the next day, and he said, “I better show up then.” He said it with a wry grin and twinkle in his eye. Then his handlers took him away.

My kids were surprised by my audacity, but when opportunities come, I have tended to be one who seized them. Life is too short not to, because a tomorrow is never promised. And Jesus taught us, “You have not because you ask not.” Now Jesus was talking about prayer, but all someone can say is No, and at least you know you took the chance. And like that day, it paid off.

Bartimaeus, given this shot, this once in a lifetime moment, asked of this Son of David his heart’s desire. “My teacher, let me see again.”

Our heart’s desire is as personal as our fingerprint, and as intimate as our dreams.

For Bartimaeus,  Jesus said, “Go; your faith has made you well.” Immediately he regained his sight and followed Jesus on the way.

Bartimaeus had nothing to lose and everything to gain. His faith in God and in his servant, God’s Messiah, God’s Son of David, was what made all the difference. Jesus said Yes.

This is a hard thing. It would be so easy for me to stand here and say the words, “With faith you can do anything.” But remember prayer is not to Santa Claus. God answers prayers. I can say it with some authority. I have seen it too many times. But God answers prayers in three ways, Yes, No, and Not Now.

There have been many times when I have pleaded with God, heartfelt, full of faith and hope. And there has been no heard response. But sometimes a Yes happens in moments or hours. And sometimes the response has been months or years later. I could say prayer was a vending machine, but we all know that that is not how it works.

Faith is stepping ahead when we do not see where our foot will fall. The role of faith is often getting us to take that step, even when people are sternly ordering us to be quiet, or mocking us in derision. Even when we are not feeling it, or reeling in pain. Faith is that assurance of the things we are hoping for, being able to see them with the eyes of our heart when all credible evidence goes against it.

Bartimaeus was commended. His faith made it possible for him to be healed. Our relationship with God is like that. He can only do what we allow him to do. Yes, he is the Open Door, but we must walk through it. Yes, God has left tickets for us at Will Call, but to get in we have to trust that we are invited in, and even VIPs.

Believing is the smallest part, acting on that belief is what makes it faith. As James reminds us, faith without action is, well, dead.

But when I asked the hypothetical, what is it you would ask of Jesus, how many of you thought to yourself, “Well, that will never happen!”

And guess what, that is why it doesn’t.

What is stopping you from asking it of Jesus now? The worst that could happen is for him to say No. Or Not Now. Think on it. What if Jesus said Yes, like he did with Bartimaeus. How would you act? What would change?

If you ever read a self-help book on things like being successful, they say things like, “Dress for the job you want, not the one you have.” Our friends in recovery have a slogan that means much the same thing, “Fake it till you make it.”

To filter it through Bartimaeus, “Act like it can happen, and it just may.” Like Bartimaeus, we need to Step Into It. Step into the Possibility of a Dreamt for Reality. We do not wait outside begging, when the healer is inside waiting for us.

My hypothetical, what if you prayed right now for Jesus to help you in that area. It could be a relationship. It could be a situation where you need help. It could be a medical need. Whatever it is, act like it can be better, and it just may be.

And if it does not, look and see how you are blessed in other ways. St. Paul had his thorn in his side, and we know he prayed for its removal for years, whatever it was. If St. Paul got his No or Not Now, don’t lose faith if it happens to you. Your prayers are still being answered, but not with the answer you want, but with the big picture in mind, the answer needed.

I think one reason why we are so hesitant to pray this way is because what happens when God says Yes? What would that mean for us? What changes will we have to make in life? Too often we settle for living in our discomfort instead of taking the energy to ask and help make it happen.

When Jesus says that we can have faith that moves mountains I believe that he means it. We have to see that mountain gone. Truly gone. We have to pray for help. Deeply, profoundly pray. And then we have to pick up our shovel and our bucket and get to work. Hard, sweat equity Work. It takes all of it to make anything happen. 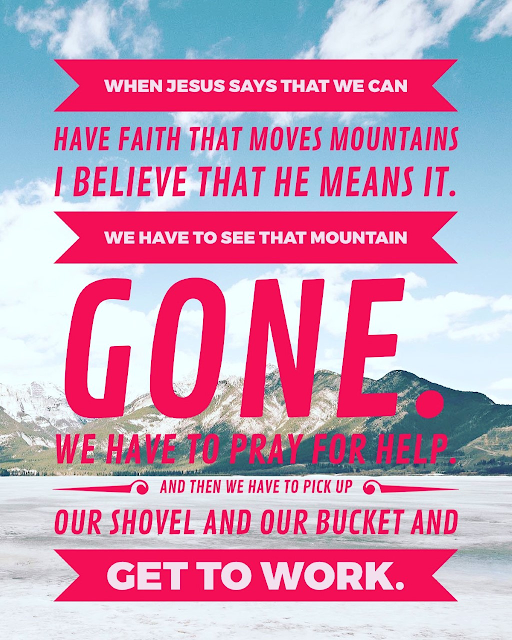 We are asking you to have a lot of faith right now. The country is divided, and some are saying the economy is questionable. We are looking to increase our budget to increase what we can do as a church, and last weekend we tossed out a bold vision to expand the impact we have on Ashland. I hope you read my article this last week where I tried to spell it all out.

But for anything that we have to have faith to do: we have to see it, we have to envision God’s fulfillment of it and request God’s aid, and we have to put in our sweat equity to make that vision real. And we need to remember that we are part of a millennia-long enterprise to change a hurting world into the Kingdom of God one heartbeat of faith at a time.

God plays the long game, and invites us to step into it the time that has been given to us. I believe we can. Amen.