Collect: Almighty and everlasting God, you are always more ready to hear than we to pray, and to give more than we either desire or deserve: Pour upon us the abundance of your mercy, forgiving us those things of which our conscience is afraid, and giving us those good things for which we are not worthy to ask, except through the merits and mediation of Jesus Christ our Savior; who lives and reigns with you and the Holy Spirit, one God, for ever and ever. Amen.

Some Pharisees came, and to test Jesus they asked, “Is it lawful for a man to divorce his wife?” He answered them, “What did Moses command you?” They said, “Moses allowed a man to write a certificate of dismissal and to divorce her.” But Jesus said to them, “Because of your hardness of heart he wrote this commandment for you. But from the beginning of creation, ‘God made them male and female.’ ‘For this reason a man shall leave his father and mother and be joined to his wife, and the two shall become one flesh.’ So they are no longer two, but one flesh. Therefore what God has joined together, let no one separate.”

People were bringing little children to him in order that he might touch them; and the disciples spoke sternly to them. But when Jesus saw this, he was indignant and said to them, “Let the little children come to me; do not stop them; for it is to such as these that the kingdom of God belongs. Truly I tell you, whoever does not receive the kingdom of God as a little child will never enter it.” And he took them up in his arms, laid his hands on them, and blessed them.

Children walk in wonder and delight. They do that because they observe. They notice. Everything is new. We become old when we cannot, or do not, look with fresh eyes. Looking at anything with that openness and enthusiasm, does not just stop us from becoming jaded and cynical, it prevents the calcification of our very souls.

From an infant exploring their own hand. From sensations that surprise and delight. The wind streaming by in a car window, and letting our hand swim through it like a dolphin. The first time you can see your breath in the deep fall. The rush of the wave against your shins in your first tentative steps into the waves. We are fearfully and wonderfully made in a cosmos created with almost as much care and dedication.

When we begin to become aware of that sense of deep abiding devotion to the most minute of details and the swirl of galaxies, it can be staggering. It is all-encompassing. The Grace of God comes roaring in, and we feel overwhelmed, overjoyed, and head-over-heels all at once.

Jesus encouraged us to approach our faith this way. “Truly I tell you, whoever does not receive the kingdom of God as a little child will never enter it.” I do not see this as blind naivete, but rather as lifelong wonder. The agnostic looks at life and sees a biological function. Not wrong, but I hope for a bigger picture. We are spiritual creatures having a physical experience, so we are greater than the sum of our parts.  Through the eyes of faith, we consider the lilies of the field or the birds of the air and we see them giving glory to God, and because of that we do, too.

Michelangelo, the great Renaissance painter and sculptor, never lost that sense of childlike wonder. A man of immense genius, he strove to always improve, obsessively at times it seems. His sculpture David in the Accademia Gallery of Florence, Italy, and the ceiling of the Sistine Chapel in the Vatican both show works of art that seem to breathe and still capture our imagination. According to a story, someone asked Michelangelo at the age of 83, “How does one live a good life?” His response was just two words: Ancora imparo. That is Italian for “I am still learning.” This man of immense genius was still striving and growing, he was changing and learning, just like a child. He never lost that Beginner’s Mind. He was still learning to have a good life at 83, and he had a good life because he was still learning at 83. May we all be so lucky.

I found myself relating another story this last week, one from my life, and it is still fresh in my mind. I was serving in a church stuck in a fear cycle. They had had a fight before I came and had lost about a third of the congregation, a big portion of which was the young families with kids. The Lead Minister was blamed. He blamed the people. Declining numbers, increasing expenses, it was a hard place to be. Everything came back to “How can we keep from dying?” And by the point when you circle the wagons you might as well admit, you are already dead.

A religion based on fears and controlling outcomes (which really means people), comes to no good. Short term wins are eventually lost and the jaded cynicism and spiritual calcification I mentioned earlier too often replace the limited gains that may have been made.

It was in that spirit that I was seeking answers to escape to fears and lead people away from them when I went to a conference all the way out in Seattle, some people looking at our faith in the age we are actually in, not the way we wish it to be, or holding out for a time that never actually was. They were wanting a faith for the Here & Now, a twenty-first century approach to an ancient and even timeless belief.

It was an eye-opening few days, learning, growing, being challenged. Most of us were in our 20s or early 30s, but there was a sense of shared relief that we were coming from places where we were being seen as different or strange, or even heretical, for questioning the direction of the Church as she moved into this new millennium. Just over a month after 9/11, the wars had just started while we were out there. So much uncertainty mingled together with a feeling of hope that things could actually change.

Wandering around throughout the conference, though, was a little man in his early 60s I would have guessed just taking it all in. He wore a brown hoodie, which was rather nondescript and I only paid attention to it after the fact. At the closing address I learned that the little man in the brown hoodie was Father Richard Rohr, prolific writer and thinker, a Franciscan with his characteristic brown, but a hoodie and jeans in lieu of his normal habit. He gave the closing address, and in his hour of speaking he pointed to the thing that I was missing in my attempt to help lead a congregation out of fear and into a life-giving Gospel of Jesus Christ. As it says in 1st John (4:18), perfect love drives out all fear.

Father Rohr went on to describe a cosmos made from love and for love. He described layers of creation, and our awakening to it. He spoke of the call of God, a loving, caring voice so different from the “sinners in the hands of an angry God” that I had too often heard and had sometimes preached. To sum up his message, he described a universe created, bound, and ruled by Grace. That’s it, Grace. But it was unlike a Grace I had ever heard of, or been able to conceive. It was as if during his talk there was a tremendous crack, the only thing I can liken it to is the Grinch’s heart growing three sizes that day. It was as if my very soul had cracked open like an egg, and what emerged was a fledgling on shaky legs,  a new awareness of the Grace of God and a long-sought hope for this world-weary soul.

After the talk I waited in the long line of folks to thank Father Rohr, and I was the last one in line. Stephanie was with me, poor woman. As I went forward and finally got a chance to speak, I said, “Father Rohr, I have been a pastor for over 10 years, but I think today I really heard the Gospel for the very first time.” That’s all I could get out because my calcified soul broke open, and the tears flowed. I sobbed. Words were not needed. He hugged me, and cried some, too. I was truly born again in that moment.

The removal of those blinders, of fear, of control, changed my ministry. It eventually led me into church planting and then from there into the Episcopal Church. Looking back, the path seems so clear and makes so much sense, but looking ahead we could only trust. And we could only move forward in that sense of childlike faith that the one who is bigger, and stronger, and who loves us will be there with us every step of the way. 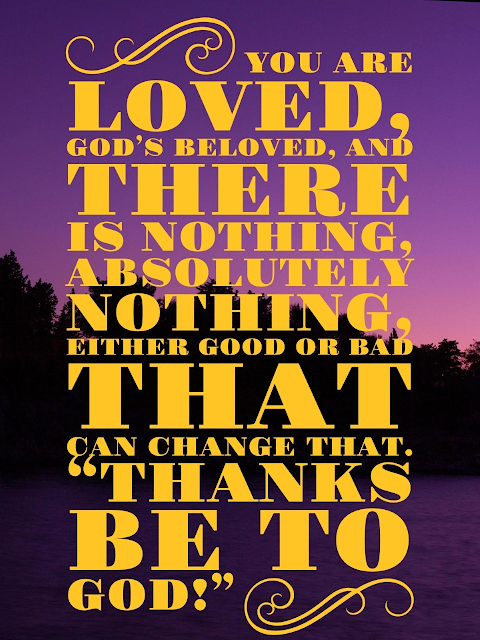 The God who is ahead forging the way is the God who will welcome us home.

There is no shaming with a God who is with us all the way. God knows us better than we know ourselves. The teaching on divorce that we find troublesome in today’s reading is not about shaming or producing guilt in my opinion. It is Jesus holding up a mirror for us to see the implications of our actions. God’s desire is that our marital relationships be an honor and glory to him and to us. Divorce is apart from the dream and hope we have for our children when we send them out into the world. Divorce is apart from the wish and hope God has for our relationships of all sorts, especially this most pivotal of commitments, marriage.

And that, friends, is how we can let go of our grown-up pretensions and shift back into that child-like gear of wonder and awe, enjoying, embracing, and experiencing each moment of our one wild, precious, fleeting, and beautiful life. How could we not? Amen.