Collect: Almighty God, you have given your only-begotten Son to take our nature upon him, and to be born this day of a pure virgin: Grant that we, who have been born again and made your children by adoption and grace, may daily be renewed by your Holy Spirit; through our Lord Jesus Christ, to whom with you and the same Spirit be honor and glory, now and for ever. Amen.

He was in the world, and the world came into being through him; yet the world did not know him. He came to what was his own, and his own people did not accept him. But to all who received him, who believed in his name, he gave power to become children of God, who were born, not of blood or of the will of the flesh or of the will of man, but of God.

And the Word became flesh and lived among us, and we have seen his glory, the glory as of a father's only son, full of grace and truth.

[Note: This sermon is on traditions. And one of my traditions is to preach a version of this sermon every Christmas Day. If it sounds familiar, it is. Merry Christmas! And may your traditions, and this one of mine bring you comfort this year! Blessings- Rock+]

This is our second pandemic Christmas. We are gathering, but we are distanced. We are singing joyful carols, slightly muffled through masks. The pandemic is not over, but so many of us were over it a long time ago. I am weary from being at the rudder during stormy seas, but I know the role that this place plays in so many lives. We do what we do out of love. We do what we do amidst the frustrations, amidst the complaining and second-guessing, amidst the grief. We grieve because things are not the way we want them to be. They cannot be for now. And all of us respond to that disappointment and grief in our own ways.

That makes the traditions that we can have all the more special.

Stephanie and I were married on the 19th, so on our honeymoon we began to read the three Gospel accounts of Christmas from Luke, then Matthew, the John. And then we read the Gospel according to Dr. Seuss. The Grinch is Gospel, as there is a conversion when his heart “grew three sizes that day.”

We got to read those together last night in the Rectory. Another Traditional Ritual is  the eating of Chinese Food which comes from my birth family who always went to the Chinese restaurant after the Christmas Eve service. Wonton Soup might not scream “Happy Birthday, Jesus!” to you. But it does to me.

Another one of my traditions is to usually cry, whether I want to or not, when I hear, “I Heard The Bells On Christmas Day.” The song comes from a poem by Longfellow. A simple song, a throwaway song almost until you hear the words with Longfellow’s thoughts in your mind. Two years after his wife died in a tragic accident, which also left him permanently scarred, Longfellow’s son enlisted in the Union Army in the Civil War. Receiving a grave wound, Charley, Longfellow’s son was in hospital in Washington, D.C. Longfellow joined him there to help in his recovery. On Christmas Day, in the midst of personal tragedy and in a beloved country ripping itself apart, he penned these words.

I heard the bells on Christmas Day

And wild and sweet,  the words repeat

And thought how, as the day had come,

The belfries of all Christendom

Had rolled along the unbroken song

Till ringing, singing on its way,

The world revolved from night to day,

A voice, a chime, a chant sublime

And in despair I bowed my head;

"There is no peace on earth," I said;

“For hate is strong, and mocks the song

Of peace on earth, good-will to men!"

Then pealed the bells more loud and deep:

"God is not dead, nor doth He sleep;

The Wrong shall fail, the Right prevail,

With peace on earth, good-will to men."

And that poem became a song when we are tired and beaten by a world that ignores the message of Hope and Love we share at Christmas. One cannot be cynical and call oneself a disciple of Christ. It is as hypocritical as the bigot, the sexist, the blatant sinner. Cynicism is a sin of the heart. And this song reminds us of that.

This year, I look to the Christ Child in hope, and in trust. I have to. 810,000 of our fellow citizens have died from this disease, more than doubling since last Christmas when the toll was at 325,000. 50 million Americans remain unvaccinated who could be. I cannot fathom that number or the reason why. I have a joke t-shirt a parishioner gave me my first Christmas here. “Y’all Need Jesus!” it says. I think that when I hear the numbers. 5.38 million have died worldwide so far. 5.38 million souls. We all need Jesus. We all need hope in days like these.

Speaking of Hope, one of my favorite Christmas traditions is Charlie Brown’s Christmas Special.

I heard an interesting piece of trivia, and I have shared it the last few years. I am shocked I had never noticed it before. You see, Linus stops the production of the Christmas show rehearsal to tell Charlie Brown the real meaning of Christmas, and he quotes Luke 2.

8 And there were in the same country shepherds abiding in the field , keeping watch over their flock by night. 9 And, lo , the angel of the Lord came upon them, and the glory of the Lord shone round about them: and they were sore afraid . 10 And the angel said unto them, Fear not: for, behold , I bring you good tidings of great joy, which shall be to all people. 11 For unto you is born this day in the city of David a Saviour, which is Christ the Lord. 12 And this shall be a sign unto you; Ye shall find the babe wrapped in swaddling clothes , lying in a manger. 13 And suddenly there was with the angel a multitude of the heavenly host praising God, and saying , 14 Glory to God in the highest, and on earth peace, good will toward men.

“That’s the meaning of Christmas, Charlie Brown.” Linus, being a cartoon character, is defined in simple ways. He is a believer, trusting or naive, depending on your point of view. He also is comforted by his security blanket and sucking his thumb. He holds tight to his protection from his insecurities, and most of us cannot think of Linus without it.

But if you go back to watch the video, and I did a couple of times to make sure, while he is quoting Luke, a most amazing thing happens. As soon as he says “Fear not!” his hand disappears from the screen and it returns without the blanket. The boy who is so timid, so fearful, goes center stage and let’s go of his fears, or at least his comfort from his fears. His “security” dropped at his feet. You see, the one who can stand with Linus, the one who can stand beside Longfellow in his pain and grief, the one who can stand beside me in my weakness and insecurities and you in yours has come into the world. “Fear not: for, behold, I bring you good tidings of great joy, which shall be to all people.” 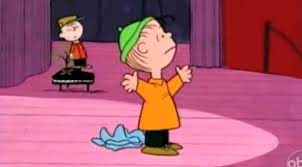 Maybe that is the greatest Christmas Tradition of them all, and it started with Mary, then Joseph, then the Shepherds all the way down to us. And we gather in the midst of a raging pandemic, holding onto hope and offering it to a suffering world. Immaneul, God-with-us, encourages us and is with of us through all of it. That is Christmas, and always will be. The words of the angels come to us today, “Fear Not.” And that my friends, is a Tradition to keep, especially in 2021! “Fear Not!” Amen