Collect: Stir up your power, O Lord, and with great might come among us; and, because we are sorely hindered by our sins, let your bountiful grace and mercy speedily help and deliver us; through Jesus Christ our Lord, to whom, with you and the Holy Spirit, be honor and glory, now and for ever. Amen.

After this I looked, and there in heaven a door stood open! And the first voice, which I had heard speaking to me like a trumpet, said, “Come up here, and I will show you what must take place after this.” At once I was in the spirit, and there in heaven stood a throne, with one seated on the throne! And the one seated there looks like jasper and carnelian, and around the throne is a rainbow that looks like an emerald. Around the throne are twenty-four thrones, and seated on the thrones are twenty-four elders, dressed in white robes, with golden crowns on their heads. Coming from the throne are flashes of lightning, and rumblings and peals of thunder, and in front of the throne burn seven flaming torches, which are the seven spirits of God; and in front of the throne there is something like a sea of glass, like crystal.

the Lord God the Almighty,

who was and is and is to come.”

Jesus said: “Who then is the faithful and wise slave, whom his master has put in charge of his household, to give the other slaves their allowance of food at the proper time? Blessed is that slave whom his master will find at work when he arrives. Truly I tell you, he will put that one in charge of all his possessions. But if that wicked slave says to himself, ‘My master is delayed,’ and he begins to beat his fellow slaves, and eats and drinks with drunkards, the master of that slave will come on a day when he does not expect him and at an hour that he does not know. He will cut him in pieces and put him with the hypocrites, where there will be weeping and gnashing of teeth.”

We are presented today with two diverse images. One of awe and one of fear. One in the Gospel, the other in the Revelation to John.

Now both are powerful and meaningful, profound motivators in the human psyche. Fear compels us when we are unsure and hesitant. Awe inspires us to the point we cannot look away.

In Jesus’ parable, we see Matthew’s abbreviated version of a parable we have heard before. One was supposed to be responsible, and given the authority to do what was to be done for his Lord. But when delayed, the servant begins to use and abuse the authority entrusted to him. He beats those beneath him, gets drunk alongside drunkards, and then is caught unaware when the Lord returns home. What did the servant think? What other outcome could he expect than to be cut to pieces and put out where there is weeping and gnashing of teeth.

But then we see where one has a proper relationship with the authority. Sitting in the very presence of God, we have 24 elders dressed in white wearing golden crowns. And around them four living creatures which through church history have been seen as the four evangelists, Matthew, Mark, Luke, and John. St. Jerome, the translator of the biblical texts to Latin, the Vulgate, associated each Evangelist with one of the living creatures: Matthew is the Man; Mark is the Lion; Luke is the Ox; and John is the Eagle.

There is thunder and lightning, the torches of the seven spirits of God, and these words: “Holy, holy, holy, the Lord God the Almighty, who was and is and is to come.”

This is where there should be true fear, true terror, but it is not there. There is power and might, and awe. Awe is being in the presence of something beyond belief or comprehension. Think of that famous shot in most Steven Spielberg movies, where people are seen looking up in wonder, whether Close Encounters, E.T., or Jurassic Park. He always uses it to shape our emotions. When we are confronted with something so much greater than ourselves, awe can only be our response.

But notice in all of the details in Revelation, there is no fear mentioned. Perfect love drives out all fear. Fear only comes in the absence of love. The servant did not love the Lord, and was afraid when they arrived.The elders, seated in the very presence of God Almighty, within striking distance, sat in awe singing praises.

“Holy, holy, holy, the Lord God the Almighty, who was and is and is to come.”

This morning think on where you are expressing or feeling fear.

Then, think on where you are expressing awe. When was the last time your mouth gaped open? 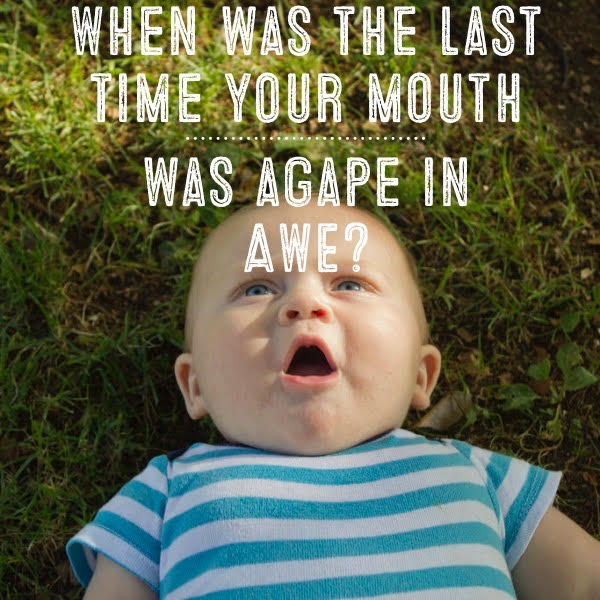