Collect: O God, whose blessed Son came into the world that he might destroy the works of the devil and make us children of God and heirs of eternal life: Grant that, having this hope, we may purify ourselves as he is pure; that, when he comes again with power and great glory, we may be made like him in his eternal and glorious kingdom; where he lives and reigns with you and the Holy Spirit, one God, for ever and ever. Amen.

Some Sadducees, those who say there is no resurrection, came to Jesus and asked him a question, "Teacher, Moses wrote for us that if a man's brother dies, leaving a wife but no children, the man shall marry the widow and raise up children for his brother. Now there were seven brothers; the first married, and died childless; then the second and the third married her, and so in the same way all seven died childless. Finally the woman also died. In the resurrection, therefore, whose wife will the woman be? For the seven had married her."

Jesus said to them, "Those who belong to this age marry and are given in marriage; but those who are considered worthy of a place in that age and in the resurrection from the dead neither marry nor are given in marriage. Indeed they cannot die anymore, because they are like angels and are children of God, being children of the resurrection. And the fact that the dead are raised Moses himself showed, in the story about the bush, where he speaks of the Lord as the God of Abraham, the God of Isaac, and the God of Jacob. Now he is God not of the dead, but of the living; for to him all of them are alive."

When I was teaching middle school in Church Hill (downtown Richmond), I had a student that would start the day in some really harsh way. If I asked everyone to sit down, she made a point of standing up. If I asked folks to be quiet or silent, she then asked her friend about what they were doing after school. One day, her belligerence was over the top, and as we went through this regular dance she looked me in the eye, and said, “You wanna slap me, don’t you?”

In that moment, a lot went through my mind.

A) you are a little, hurting girl who has to act grown-up to survive in this harsh world you have been thrust in,

B) that was not even on my list of options that I was considering,

In that split second, as she was tensing and staring me down, I actually laughed. Yes, I laughed. As she was gunning for a fight, I was the grown-up. I had full control of my response. She had no power in this situation that I did not give her.

The laughter shook her. That is one thing she did not expect. I looked her dead in the eye back, and said, “No, I would never hit you or slap you. Nothing you could do would illicit that response. Besides, I love my wife and kids too much to hurt a student and get fired.”

That impressed her. She actually nodded, and said, “Because you’re a real man.” And walked away to her seat to do what I asked. It broke my heart that one so young was that worldly-wise and that world-weary. But it also showed, she was watching, and testing, and amazingly enough, I passed. She was a different kid after that singular encounter. At least with me.

One of the most difficult things we can do as we make our way in this world is to establish healthy boundaries. In fact, that is often where we are first attacked in our day in and day out. It is what it is.

Remember the Velociraptors in Jurassic Park? They attempted to break out each and every chance they had. They knew the fences were electrified. And yet, they tested them anyway. Link. By Link. By Link. That is what they did because they were smart. And because they were smart, they knew that eventually there would be a weak link, an unelectrified section, and they would break free.

When people test our boundaries, that is what they are doing. Looking for the weak link, the chink in the armor as it were.

And you may be asking yourself, “Rock+, what on earth does that have to do with Jesus?” If we look at a straight reading of the text, not much or nothing. But if you look at what they are attempting to do to Jesus, and what he does to block and stop them, this is exactly what we are talking about.

The question, in and of itself, is moot. The Sadducees have no standing here. They do not believe in a resurrection. “Once you are dead, you are dead,” they would think to themselves. There is no life after this one. But they knew Jesus did, so they tried to trick him on something that mattered to HIM, not THEM. They were playing a game.

But with that in mind, look at their question. "Teacher, Moses wrote for us that if a man's brother dies, leaving a wife but no children, the man shall marry the widow and raise up children for his brother…" Yadda, yadda, yadda… "In the resurrection, therefore, whose wife will the woman be? For the seven had married her."

Jesus knew, and so do we, those posing the question did not care what his answer was. Whatever he said, they were going to spin it, to skew it, in such a way that it meant something bad. They would use it to make Jesus look bad, or silly, or stupid.

It’s like the no-win question, “When did you stop beating your wife?” Any way you answer that you are in trouble.

And how do we protect ourselves in a no win situation?

That is a hard one. And we often face them more often than we want to admit.

Jesus knew that it was silly what they were asking and said as much. "Those who belong to this age marry and are given in marriage; but those who are considered worthy of a place in that age and in the resurrection from the dead neither marry nor are given in marriage. Indeed they cannot die anymore, because they are like angels and are children of God, being children of the resurrection."

Marriage is for here, on this plane of existence. Not there. Not then.

And then goes on to talk about how God speaks of those he is in relationship with in the Present Tense, not Past. "And the fact that the dead are raised Moses himself showed, in the story about the bush, where he speaks of the Lord as the God of Abraham, the God of Isaac, and the God of Jacob. Now he is God not of the dead, but of the living; for to him all of them are alive."

Jesus got them in the Gotcha question. They were moot.

But there is something else Jesus is modeling for us here, as I started, healthy boundaries. They are so hard to set up, and so necessary for us to make it in the world we live in.

Unhealthy people trample on boundaries. It could be expressed in a lot of ways. Snide comments. Passive aggression. Belittling. Ignoring politeness because we are “friends”, or some other flimsy excuse. It could be doing things that cross lines, not allowing people the common respect they deserve. 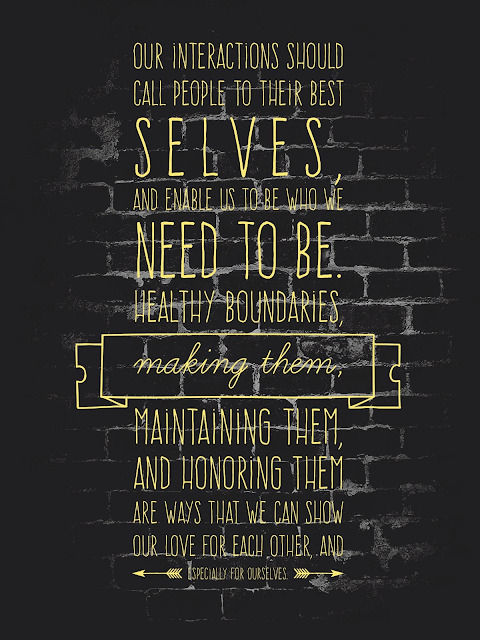 As we uphold our Baptismal Covenant, for us to respect the dignity of all people, that includes how we allow them to be them. And to be responsible and mature themselves. Our interactions should call people to their best selves, and enable us to be who we need to be.

Healthy boundaries, making them, maintaining them, and honoring them are ways that we can show our love for each other, and especially for OURSELVES. No one respects a dishrag.

It takes a more powerful person, a person at home in their skin, a person secure in their identity and belovedness to turn the other cheek. It takes the bigger person to take a hit, stand there, and have the audacity to offer the other.

Wimps cannot do that. Wimps collapse when struck. Wimps wither. Turning the other cheek as Jesus commanded us to do takes a strong, mature adult knowing the cost and willing to pay the price.

A person with healthy boundaries can live up to the call of Jesus for us to turn the other cheek, or to give our tunic in addition to our shirt, or to go the second mile if the first is demanded. These are not the actions of those insecure in themselves.

Healthy boundaries make for healthy relationships. This is allowed and it is appropriate.

Beware those for whom your boundaries are an issue. They do what they can to make you guilty over keeping things simple, and healthy. See right through them and what they are trying to do. Manipulators attack your boundaries first.

Just because you choose not to play their game does not mean you cannot. It means that you love yourself, and hopefully them, enough to have clear lines of what is acceptable and what is not.

The holidays are coming up, and there may be a relative with whom you have a recurring script. They play their part. You play yours. You see it coming a mile away. Remember the Wolf and the Sheep dog Looney Tunes cartoons? Many of you may think it was with Wile E. Coyote, Super Genius, but it is not. The Wolf, Ralph, is nearly identical to Wile E. with a few minor paint corrections. But Ralph Wolf and Sam Sheepdog would walk to work together, clock in, and then they became mortal enemies. One going for the sheep, and one protecting them. They were fine and good until they stepped into their roles. How often do we play the same ridiculous type of game?

We have to just stop it. Break the cycle. When Uncle Mort, or whichever relative again goes down that well-trodden trail, maybe even ask, “Uncle Mort, I love you. I want it to be easy to love you. You are trying to bait me here. I see it. I acknowledge it. I refuse to do it. What other ways can we interact so that we do not have to go down that path again?”

Now you might get lucky and Uncle Mort may hear you the first time, but it probably will not be the case. You may have to politely walk away. Jesus may be the Door, but we do not have to be a doormat.

Matthew 10:16 “I am sending you out like sheep into the midst of wolves, so be wise as serpents and innocent as doves.”

In the living of these days, having clear and firm limits is all the more necessary. Healthy boundaries! Amen