Collect: Almighty and merciful God, it is only by your gift that your faithful people offer you true and laudable service: Grant that we may run without stumbling to obtain your heavenly promises; through Jesus Christ our Lord, who lives and reigns with you and the Holy Spirit, one God, now and for ever. Amen.

Jesus entered Jericho and was passing through it. A man was there named Zacchaeus; he was a chief tax collector and was rich. He was trying to see who Jesus was, but on account of the crowd he could not, because he was short in stature. So he ran ahead and climbed a sycamore tree to see him, because he was going to pass that way. When Jesus came to the place, he looked up and said to him, "Zacchaeus, hurry and come down; for I must stay at your house today." So he hurried down and was happy to welcome him. All who saw it began to grumble and said, "He has gone to be the guest of one who is a sinner." Zacchaeus stood there and said to the Lord, "Look, half of my possessions, Lord, I will give to the poor; and if I have defrauded anyone of anything, I will pay back four times as much." Then Jesus said to him, "Today salvation has come to this house, because he too is a son of Abraham. For the Son of Man came to seek out and to save the lost."

There is a way of reading Scripture where we picture ourselves in the text. We use our imaginations to read, and when it really works, to be read by, Scripture. Often called Lectio Divina, “divine reading” or “sacred reading,” God speaks to us by our innermost thoughts and feelings. By envisioning ourselves in the story, it can stop being our imaginations, and it can become our very life.

This story of Zaccheus came into reality for me in some of my earliest days. Never say childrens’ ministry is not important. In those days of carpet squares and felt story boards, I heard the Word of God, felt the Call of God, and experienced the Grace of God. And it started with this story, along with several others.

It became so real for me because of how I could picture it inside my mind. I do not remember how old I was when I first heard it, and the song I learned around it, but it was early enough that this story has been a part of my conscious life as far back as I can remember.

We practice Lectio Divina at the beginning of our Vestry meetings, and in speaking with our spiritual leadership I was surprised that they had never heard the song about Zaccheus! It was a favorite of my childhood, and as big a part as Twinkle Twinkle Little Star or Little Bunny Fufu.

I was surprised that it was only something from my childhood. If you learned it, by chance, please sing along.

He climbed up in a sycamore tree for the Lord he wanted to see.

And as the Savior passed that way, he looked up in the tree, and said…

Zacchaeus, you come down!

I call this my earliest Lectio Divina because even as a preschooler I could envision being small. I was small! I could envision climbing trees. I climbed trees! I could feel the bark on my fingers, my arms wrapped around the limb. I could envision looking down on Jesus, and seeing him there below me. I could see him looking me in the eye, and telling me to get down. My mom did that to me when I climbed too high all the time. The only stretch in this was the idea of Jesus saying he was coming to my house today. And that was not much of a leap. I was a child with an active imagination.

I remember one day we were heading home from Vacation Bible School and we stopped at McDonald’s for lunch. And there, right in front of us in line, was Jesus. I remember looking up at my mom, and saying, “Mom! It’s Jesus!” And she shushed me. We had stopped for a Happy Meal and we bump into the Almighty! The Bible verse that day must have been “Suffer the little children come unto me!” because I was not letting it go! I knew Jesus would want to meet me. Little did I realize in my tiny body and mind that this was the early 70s and this was a hippie not Jesus. But it was so real! Having a precocious and curious child can be a gift and a curse.

Zacchaeus was curious, too. Jesus’ reputation had spread. And here he was about as low as he could get. A tax collector, he was despised. He did not only gather taxes for the Romans, he had to bribe them to get the job. So a traitor, and most likely a crook to boot to pay for the bribe, Zacchaeus was about as low as one could get. And even more, this was Jericho and geography must be taken into account. Jericho sits at the junction of the Jordan River and its entrance to the Dead Sea, the lowest point on planet earth. The low man in town at the lowest spot on earth. And even more, he was short. We are talking snake belly low.

So traitor, crook, short, Zacchaeus may not have even tried to see this wandering rabbi first hand. He knew not to push his way into the mass crowding in to see Jesus. Why bother? He was curious, though. What could this guy be like, if all the stories were true? Could he really heal? Were his stories and teachings as transformative as people said? Maybe, just maybe, if I could get a glance, Zacchaeus may be able to get a feel of this Kingdom of God that Jesus yammered on about.

And so the stage is set. All the actors are in place. A crowd, the good, bad, and ugly shoving their way in to see this one about which so much was said. Our meager Zacchaeus, his wee self, perched up in the tree only hoping for a glimpse. And Jesus and the followers passing that way.

When Jesus came to the place, he looked up and said to him, "Zacchaeus, hurry and come down; for I must stay at your house today." So he hurried down and was happy to welcome him.

No one, NO ONE, saw this coming. No one envisioned this at all. Especially Zacchaeus. He climbed down lickety-split, a happy man. A wee happy man.

But we all know that as joyful as this could have been, there has to be some conflict or people would not have remembered it, much less included it in Scripture 2,000 years ago.

All who saw it began to grumble and said, "He has gone to be the guest of one who is a sinner."

They all were aghast. Does he know who he was talking to? If this guy is so holy, he would not be mixed in with filth like him! You can hear it. Grumble grumble grumble grumble. Human nature has not changed that much in 2,000 years. And here human nature stays true. We approach life like some zero sum game. For me to win, there has to be a loser. And I am happy to have a loser, as long as it's not me.

But contempt is easy. Rich. Hate him! Tax Collector. Hate him! Short!

Contempt is us looking down on someone else thinking it will make us feel better. As Samuel Johnson reminded us, “Contempt is a kind of gangrene which, if it seizes one part of a character, corrupts all the rest by degrees.” And if the Grumblers had contempt for Zacchaeus, it was then carried over to Jesus as well.

But then we see the movement of Grace, the immense shifting of glaciers before our eyes. Zacchaeus was as transformed as the Grinch, whose heart grew three sizes that day.

Zacchaeus stood there and said to the Lord, "Look, half of my possessions, Lord, I will give to the poor; and if I have defrauded anyone of anything, I will pay back four times as much."

No one asked this of him. Most of us, even the most despicable, know what it is that we should be doing. The good we could do is out there. The question is will we?

For Zacchaeus, he did not need to do what he did for Jesus to come over. But in being seen, acknowledged, and chosen the dam broke. The Grace of the moment became the Grace of a life. A flood gate opened up and Grace poured in, and in doing so, it poured out.

Then Jesus said to him, "Today salvation has come to this house, because he too is a son of Abraham. For the Son of Man came to seek out and to save the lost."

And here we see Jesus saying, this is what I came to do. It is not about the righteous feeling better about themselves. It was to show the world that we are all seen, acknowledged, and chosen.

And what is chosen, truly chosen, cannot be let go of. In Roman culture, adoption was forever. You could disown a child if they brought dishonor. You could divorce a spouse if unfaithful or tiresome, even. But once one was adopted, it was forever. Jesus chose Zacchaeus. He would not let him go.

Even with the Grumbling.

Even with the Contempt.

Even with the Scorn.

And he was happy to do it. He came to seek and save the Lost. That was his mission and purpose. He came here to invite the Beloved of God home. And we are all Beloved. 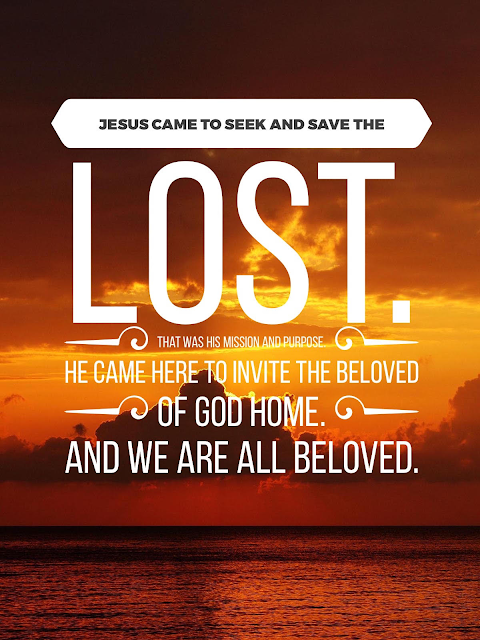 This Tuesday night during our All Saints’ service we have the joy of baptizing two adults, Tim and Hannah, who have chosen to be identified as Christ’s own forever. I love baptizing babies and standing with the families saying that they will raise the children in the faith. But when people choose to be baptized into the faith, especially as adults, we rejoice. They walk into it with eyes open, maybe tear stained, but eyes open. Like Zacchaeus, today, salvation has come to this house. How beautiful! How wonderful! How fresh and new as it was for Zacchaeus. We are often surprised by Grace. We are always Amazed by it. And there will always be Self-Righteous Grumblers. Always. That’s okay. It just shows they just do not get it.

Love people anyway, especially those hiding away thinking the parade going by is not for them, or people like them. But friends, if this story teaches us nothing else, the parade is just for them. Thanks be to God!

He climbed up in a sycamore tree for the Lord he wanted to see.

And as the Savior came that way, he looked up in the tree, and said…

Zacchaeus, you come down!