Collect: Lord of all power and might, the author and giver of all good things: Graft in our hearts the love of your Name; increase in us true religion; nourish us with all goodness; and bring forth in us the fruit of good works; through Jesus Christ our Lord, who lives and reigns with you and the Holy Spirit, one God for ever and ever. Amen.

When morning came, there was no small commotion among the soldiers over what had become of Peter. When Herod had searched for him and could not find him, he examined the guards and ordered them to be put to death. Then he went down from Judea to Caesarea and stayed there.

Now Herod* was angry with the people of Tyre and Sidon. So they came to him in a body; and after winning over Blastus, the king’s chamberlain, they asked for a reconciliation, because their country depended on the king’s country for food. On an appointed day Herod put on his royal robes, took his seat on the platform, and delivered a public address to them. The people kept shouting, ‘The voice of a god, and not of a mortal!’ And immediately, because he had not given the glory to God, an angel of the Lord struck him down, and he was eaten by worms and died.

But the word of God continued to advance and gain adherents. Then after completing their mission Barnabas and Saul returned to* Jerusalem and brought with them John, whose other name was Mark.

Jesus said: ‘Whoever is from God hears the words of God. The reason you do not hear them is that you are not from God.’

The [Jewish religious leaders] answered him, ‘Are we not right in saying that you are a Samaritan and have a demon?’ Jesus answered, ‘I do not have a demon; but I honor my Father, and you dishonor me. Yet I do not seek my own glory; there is one who seeks it and he is the judge. Very truly, I tell you, whoever keeps my word will never see death.’ The [Jewish religious leaders] said to him, ‘Now we know that you have a demon. Abraham died, and so did the prophets; yet you say, “Whoever keeps my word will never taste death.” Are you greater than our father Abraham, who died? The prophets also died. Who do you claim to be?’ Jesus answered, ‘If I glorify myself, my glory is nothing. It is my Father who glorifies me, he of whom you say, “He is our God”, though you do not know him. But I know him; if I were to say that I do not know him, I would be a liar like you. But I do know him and I keep his word. Your ancestor Abraham rejoiced that he would see my day; he saw it and was glad.’ Then the Jews said to him, ‘You are not yet fifty years old, and have you seen Abraham?’ Jesus said to them, ‘Very truly, I tell you, before Abraham was, I am.’ So they picked up stones to throw at him, but Jesus hid himself and went out of the temple.

I have mentioned before the wonderful mat behind the pulpit over at Shiloh Baptist, our sister church, that says “Preach so they can see Jesus.”

At the end of the reading this morning, we see Jesus hiding and getting away before he could be stoned to death. Hard to talk about the Good News in that.

But it does make us confront the fact, that as people of God we are sometimes required to speak the truth in love, and that truth can be very hard to hear. So the first response is to kill the messenger. Literally or metaphorically.

But speaking the truth in love is what we are called to do. 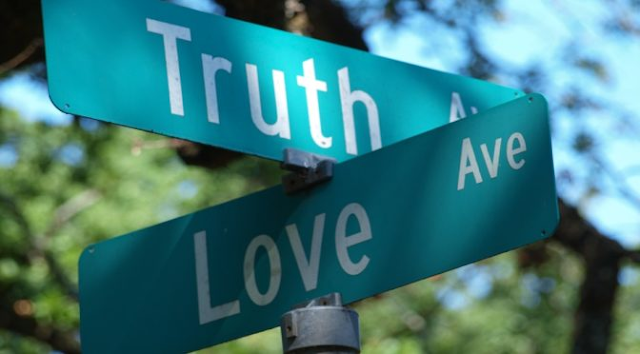 In the Acts reading, we see people praising Herod, saying how he speaks like a God instead of a man. He was speaking, but was it the truth? Was it the truth in love?

So that I do not add commentary, I will say clearly what the outcome is for Herod and the Church:

And immediately, because he had not given the glory to God, an angel of the Lord struck [Herod] down, and he was eaten by worms and died. But the word of God continued to advance and gain adherents.

Yeah for the Church? I think?

We do not live in a fully redeemed world. We still must fight the good fight, and do what the Lord requires of us. Sometimes that is hard. Sometimes people will resent and try to silence us. Sometimes that opposition comes from those we think of as friends and families. That makes the stabs in the back even more painful. Et tu, Brute?

The Call of God is a lifelong commitment, and Jesus tells us that to follow him we will have to “take up [our] cross.”

One analogy I hold onto is that the world we are living in is much like the time between D-Day and VE day. The war was over once the Allies invaded Europe, but there was a lot of pain, and suffering, and sacrifice to come before Victory was fully won.

Christ has won over sin and death, and we are in the campaign to bring the culmination of the story. Have faith, and especially have hope when times are hard. We know how the story ends. Amen