Year C Independence Day 2022 Getting What We Pray For

“Getting What We Pray For”

Collect: Lord God Almighty, in whose Name the founders of this country won liberty for themselves and for us, and lit the torch of freedom for nations then unborn: Grant that we and all the people of this land may have grace to maintain our liberties in righteousness and peace; through Jesus Christ our Lord, who lives and reigns with you and the Holy Spirit, one God, for ever and ever. Amen.

Jesus said, “You have heard that it was said, ‘You shall love your neighbor and hate your enemy.’ But I say to you, Love your enemies and pray for those who persecute you, so that you may be children of your Father in heaven; for he makes his sun rise on the evil and on the good, and sends rain on the righteous and on the unrighteous. For if you love those who love you, what reward do you have? Do not even the tax collectors do the same? And if you greet only your brothers and sisters, what more are you doing than others? Do not even the Gentiles do the same? Be perfect, therefore, as your heavenly Father is perfect.” 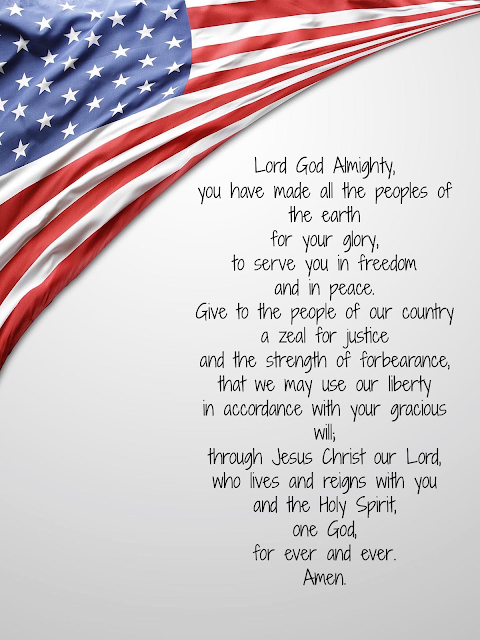 Friends, today we remember and celebrate our freedom. It is hard to discuss our freedom today, with protests in the streets and hearings over insurrections happening. It is apparent that we as a nation have lost our way.

We can no longer agree on what truth is, much less which way to move forward. And the question we, as followers of Christ, must ask ourselves, how do we follow Christ in days like these?

Give my three people and we would probably have 5 opinions, and maybe an abstention thrown in to boot.

We are in a tough time, but this is nothing new. People are problematic. Groups of people are even worse. Some of the oldest stories ever recorded looked at the problematic nature of ruling and we collectively do not know what exactly it is that we want.

Whether we look at the Tower of Babel in Genesis, or even what we have reduced to Children’s Stories coming from Aesop, the Greek slave and storyteller from around the 5th century BCE. (620-560 BCE) Here is his notorious…

The Frogs Who Wished for a King by Aesop

The Frogs were tired of governing themselves. They had so much freedom that it had spoiled them, and they did nothing but sit around croaking in a bored manner and wishing for a government that could entertain them with the pomp and display of royalty, and rule them in a way to make them know they were being ruled. No milk and water government for them, they declared. So they sent a petition to Jupiter asking for a king.

Jupiter saw what simple and foolish creatures they were, but to keep them quiet and make them think they had a king he threw down a huge log, which fell into the water with a great splash. The Frogs hid themselves among the reeds and grasses, thinking the new king to be some fearful giant. But they soon discovered how tame and peaceable King Log was. In a short time the younger Frogs were using him for a diving platform, while the older Frogs made him a meeting place, where they complained loudly to Jupiter about the government.

To teach the Frogs a lesson the ruler of the gods now sent a Crane to be king of Frogland. The Crane proved to be a very different sort of king from old King Log. He gobbled up the poor Frogs right and left and they soon saw what fools they had been. In mournful croaks they begged Jupiter to take away the cruel tyrant before they should all be destroyed.

"How now!" cried Jupiter "Are you not yet content? You have what you asked for and so you have only yourselves to blame for your misfortunes." [Source: The Aesop for Children]

I have always heard, “Be careful what you pray for. You just might get it.” The frogs in our story wanted a laissez-faire government, until they didn’t. And then a strong hand, till they felt the weight of it.

But today we prayed for something particular: Grant that we and all the people of this land may have grace to maintain our liberties in righteousness and peace…

If I use that phrase, “maintain our liberties” each of us would prioritize and think of those differently. That is where the rage and fear that is being expressed is coming from these days, especially after recent Supreme Court decisions. What is liberty to some is seen as oppression from another. And vice versa. Where is our hope?

We give Grace, and we uphold Righteousness and Peace.

Last week, in one of the most heart-wrenching emails I have ever had to send. I had to write to you, the members of the flock in my charge, that someone somewhere was talking about attacking our congregations in our Episcopal church. The Presiding Bishop’s Office felt this credible enough to share with our bishops, and our bishops shared it with us. People were enraged enough to threaten violence over positions we have taken as a church. Our local police felt it important enough to reach out to me directly.

And this is where the price of freedom is shown. We have taken many positions that some see as wrong, because of our values. As a part of the Anglican tradition, we have always chosen the via media, the middle way. We are very protestant and at the same time very Catholic. We are very conservative while at the same time very liberal. We have a common form and a wide range of living our common faith out.

We chose to try and avoid the excesses and violence that took place on the European continent during the Protestant Reformation, to limited success historically, but we tried. One way we attempted to do that was this approach, the via media.

This “Middle Way” focuses us on the form, and not the underlying beliefs which are a smorgasbord in most congregations, and we have chosen to be okay with that. As homogeneous as the Anglican Church appeared to be culturally, it recognized that the ways and motivations of the human heart, mind, and soul are varied and diverse. And we reside in the comfort of that knowledge and the occasional discomfort of that diversity.

My favorite example of this was Queen Elizabeth’s poem in response to what happens in the Eucharist: is it the actual Body and Blood of Jesus Christ, or is the Spirit in the elements?

Twas God the Word that spake it,

He took the Bread and brake it:

And what that Word did make it,

That I believe and take it.

She dances through the raindrops so beautifully, stating it is what it is, without straying too far one way or the other. It is what it is. And we, following in the Anglican path of the Via Media, attempt to do the same.

The sad part is in this environment of Black and White/bifurcated thinking, we see that not picking a way is an assumption of compliance or opposition, depending on whether we are given the benefit of the doubt or not. And so often we are not, living in times such as these.

Friends, we are about living out our faith and inviting others to join our path. And whether they do or do not, we are committed to their well-being and personhood. This is so integral to our approach to the faith of Christ that we include these vows in our Baptismal Covenant:

Will you seek and serve Christ in all persons, loving your neighbor as yourself?

I will, with God's help.

Will you strive for justice and peace among all people, and respect the dignity of every human being? I will, with God's help.

Friends, we need to voice our opposition to extremes (which may seem extreme in our climate) as too often we are pushed to adhere or be silent.

Hanging near our front door, a reminder to myself and my family before we step out into the world, is this poem by German theologian the Rev. Martin Niemoeller. He wrote this during the time of the Nazis, but it is a poignant to speak up againts tyranny, but also God’s predilection for the outcast and the vulnerable throughout Scripture.

First they came for the Communists

Because I was not a Communist

Then they came for the Socialists

Because I was not a Socialist

Then they came for the trade unionists

Because I was not a trade unionist

Then they came for the Jews

Because I was not a Jew

Then they came for me

And there was no one left

To speak out for me

If on this day we say we celebrate our freedoms, the best thing we can do is to work for and defend the freedom of all. “For freedom Christ has set us free.” [Galatians 5:1]

In my article this week I mention the quote from MLK, “The arc of the moral universe is long, but it bends toward justice.” I pray that when I have doubts and worries I am reminded that Justice will out, and that God is in control and will lead us out of any situation if we but follow him. Pray for this nation, and its leaders, ESPECIALLY if you do not like or disagree with them. Pray for wisdom. Pray for blessing. Pray for peace.

Think on it this way, if you hate the pilot of the plane you do not pray for their failure or demise. We are all in it together. Somewhere along the way someone thought it was in their interest to have us think in “Us” and “Them.” As we pray for our nation, may we pray for all of US. The U.S.A. US. And when I forget that, may God forgive me and nudge me back to our collect.

Grant that we and all the people of this land may have grace to maintain our liberties in righteousness and peace; through Jesus Christ our Lord. Amen