Friends, Some of you have gathered, some of you are joining us online. Wherever you are, and whenever you are worshiping, you belong. We are one Body, and together we are complete in Christ who calls and saves us. Honoring that, let us pray...

Thank you for hearing our prayers, our praise, and our worship,

whether we are gathered together in person or online,

whether simultaneous on livestream, or later whenever we can.

You are Lord of Yesterday, Today, and Forever,

so You are Lord of Now, whenever now is and wherever we are.

You are here, both Here and Now, with us.

In the name of Jesus the Christ, who saved us and welcomes us home in You.

Collect: O God, the protector of all who trust in you, without whom nothing is strong, nothing is holy: Increase and multiply upon us your mercy; that, with you as our ruler and guide, we may so pass through things temporal, that we lose not the things eternal; through Jesus Christ our Lord, who lives and reigns with you and the Holy Spirit, one God, for ever and ever. Amen.

When evening came, the boat was out on the lake, and he was alone on the land. When he saw that they were straining at the oars against an adverse wind, he came towards them early in the morning, walking on the lake. He intended to pass them by. But when they saw him walking on the lake, they thought it was a ghost and cried out; for they all saw him and were terrified. But immediately he spoke to them and said, ‘Take heart, it is I; do not be afraid.’ Then he got into the boat with them and the wind ceased. And they were utterly astounded, for they did not understand about the loaves, but their hearts were hardened.

When they had crossed over, they came to land at Gennesaret and moored the boat. When they got out of the boat, people at once recognized him, and rushed about that whole region and began to bring the sick on mats to wherever they heard he was. And wherever he went, into villages or cities or farms, they laid the sick in the market-places, and begged him that they might touch even the fringe of his cloak; and all who touched it were healed.

Stephanie and I have been married for 28 ½ years. Most days I know her pretty well. When we go to a restaurant, she is the type of person who knows what they want before they look at the menu. I am the opposite. I like a lot of things, and sometimes do not know what I want till the order comes out of my mouth. We know each other pretty well, thanks be to God.

But sometimes, she does something that surprises me. Standing here in front of me is an amazing, powerful, and smart woman who I am seeing with new eyes. I am fortunate that I get to spend my life with someone who still surprises me, mostly for the good.

In reading today’s Gospel, I was surprised by a juxtaposition that was new to me. I had not seen it before. The disciples, on the boat, saw Jesus, but could not fathom that it was him. “...when they saw him walking on the lake, they thought it was a ghost and cried out; for they all saw him and were terrified.” They saw, but could not truly see.

When they get on the shore, however, what is the response? “When they got out of the boat, people at once recognized him, and rushed about that whole region and began to bring the sick on mats to wherever they heard he was.” They saw immediately it was Jesus.

Those who knew him could not see him, but those who did not could. Another example of the Great Reversal. The last shall be first and the first last. Those who know cannot see, but those who are blind can see.

Now context is all. The disciples were convinced that it was a ghost, a phantasm, and that is all they could see. Those who saw him land, saw who it was and believed. It goes to show, we see what we expect to see.

I have probably told you this story before, but an experiment was done with teachers of elementary students. They were told confidentially that one of their students was a genius, but not which one. And that blind trust that one was “remarkable” had a tangible outcome. Every one of their students’ scores went up! Because any child could be “the One,” every student was treated exceptionally. While the control classes were told nothing. It was a recognizable difference.

On Sunday, I asked in several ways. How would we behave if we expected God to “show up.” And now I would ask something else, what if each of us treated one another as a saint of God? What would we do? How would we treat them? What benefit of the doubt would we give them? 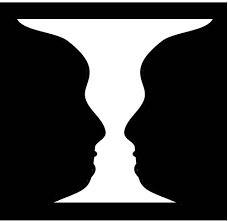