When the hour came, he took his place at the table, and the apostles with him. He said to them, "I have eagerly desired to eat this Passover with you before I suffer; for I tell you, I will not eat it until it is fulfilled in the kingdom of God." Then he took a cup, and after giving thanks he said, "Take this and divide it among yourselves; for I tell you that from now on I will not drink of the fruit of the vine until the kingdom of God comes." Then he took a loaf of bread, and when he had given thanks, he broke it and gave it to them, saying, "This is my body, which is given for you. Do this in remembrance of me." And he did the same with the cup after supper, saying, "This cup that is poured out for you is the new covenant in my blood. But see, the one who betrays me is with me, and his hand is on the table. For the Son of Man is going as it has been determined, but woe to that one by whom he is betrayed!" Then they began to ask one another, which one of them it could be who would do this.

After each Lesson the Reader may say 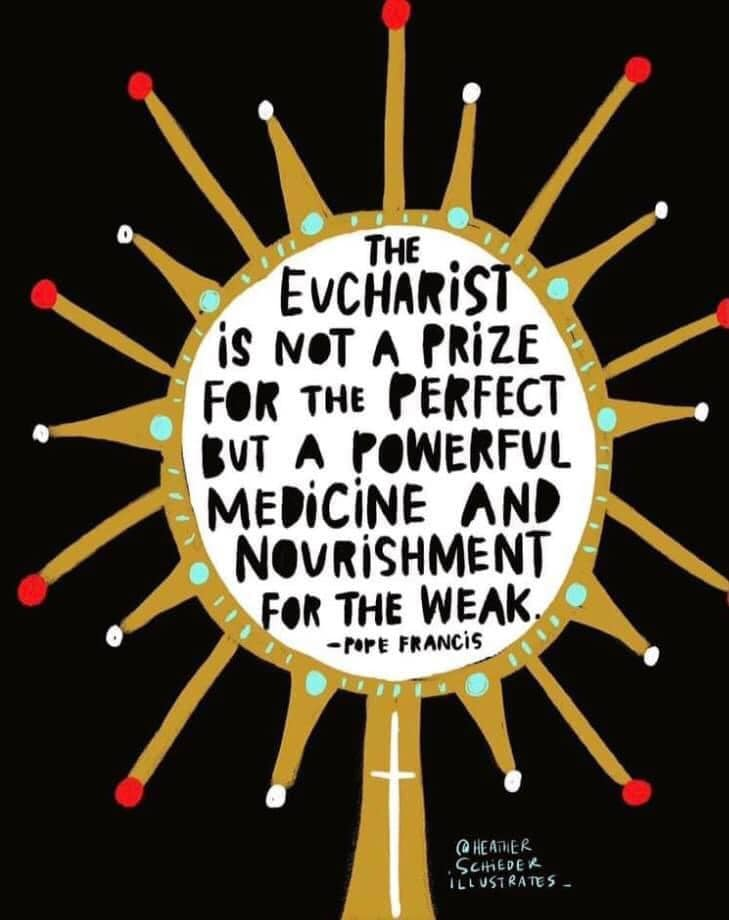 It is not often that the Eucharist makes headlines. And I am not going into the politics, whether President Biden’s or the Catholic Church’s Bishops, but that a statement on the President’s ability to take communion making headlines shows you just how important this it to us still. The Eucharist is the gift of Christ to his Church, an instruction, a memorial, a salve, a hope.

Even Pope Francis said, “The Eucharist is not a prize for the perfect, but a powerful medicine and nourishment for the weak.”

A Canadian Anglican Priest, @RevDaniel, responded to the headlines this way in a tweet (on Twitter): “I don’t understand ‘withholding communion.’ It’s not a prize for the best performance. It isn’t a gold star for top marks. It’s grace, and we’re not the ones giving it. ‘But what if someone unworthy receives it?’ [you may ask] ‘Uh, that would be everybody.” (from @RevDaniel, June 19, 2021, 4:49 pm) 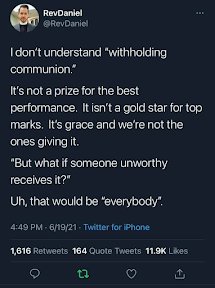 My take on it is usually to ask, from what we have seen of what Jesus did, what might Jesus do? So, who would Jesus serve? This is what we know…

Jesus served Judas who would betray him.

Jesus served Peter who would deny him.

Jesus served Peter, James, and John who would fall asleep when he asked them to stay up and pray.

Jesus served his closest followers, most of whom abandoned him in his final hours.

I think Jesus would serve anyone who chose to receive. Jesus loves all us sinners, no matter how worthy or not. In fact, who besides Jesus was even worthy to receive. “Every saint has a past, and every sinner has a future,” Oscar Wilde reminds us. And Jesus echoes that in Mark (2:17): “Those who are well have no need of a physician, but those who are sick; I have come to call not the righteous but sinners.”

The Iona Community gives us this invitation to the Eucharist, and it expresses so much of where God has brought me.

This is the table, not of the church but of Jesus Christ.

It is made ready for those who love him

And who want to love him more.

You who have been here often

And you who have not been for a long time or ever before;

Come, not because the Church invites you;

It is Christ, and he invites you to meet him here.

Friends, the last 16 months has shown has hungry the world is for connection, for community, for communion. The Church can be that. Will we?

Our response to that says much of how we see Jesus, how we preach and live Grace, how we see ourselves. Lord be our God and our model. Amen