Collect: Confirm our minds, O Lord, in the mysteries of the true faith, set forth with power by your servant John of Damascus; that we, with him, confessing Jesus to be true God and true Man and singing the praises of the risen Lord, may, by the power of the resurrection, attain to eternal joy; through Jesus Christ our Lord, who lives and reigns with you and the Holy Spirit, one God, now and for ever. Amen.

(From: A Great Cloud of Witnesses) John of Damascus was the son of a Christian tax collector for the Muslim Caliph of Damascus. At an early age, he succeeded his father in this office. In about 715, he entered the monastery of St. Sabas near Jerusalem. There he devoted himself to an ascetic life and to the study of the Fathers.

In the same year that John was ordained priest, 726, the Byzantine Emperor Leo the Isaurian published his first edict against the Holy Images, which signaled the formal outbreak of the iconoclastic controversy. The edict forbade the veneration of sacred images, or icons, and ordered their destruction. In 729-730, John wrote three
“Apologies (or Treatises) against the Iconoclasts and in Defense of the Holy Images.” He argued that such pictures were not idols, for they represented neither false gods nor even the true God in his divine nature; but only saints, or our Lord as man. He further distinguished between the respect, or veneration (proskynesis), that is properly paid to created beings, and the worship (latreia), that is properly given only to God.

The iconoclast case rested, in part, upon the Monophysite heresy, which held that Christ had only one nature, and since that nature was divine, it would be improper to represent him by material substances such as wood and paint. The Monophysite heresy was condemned by the Council of Chalcedon in 451.

At issue also was the heresy of Manichaeism, which held that matter itself was essentially evil. In both of these heresies, John maintained, the Lord’s incarnation was rejected. The Seventh Ecumenical Council, in 787, decreed that crosses, icons, the book of the gospels, and other sacred objects were to receive reverence or veneration, expressed by salutations, incense, and lights, because the honor paid to them passed on to that which they represented. True worship (latreia), however, was due to God alone. 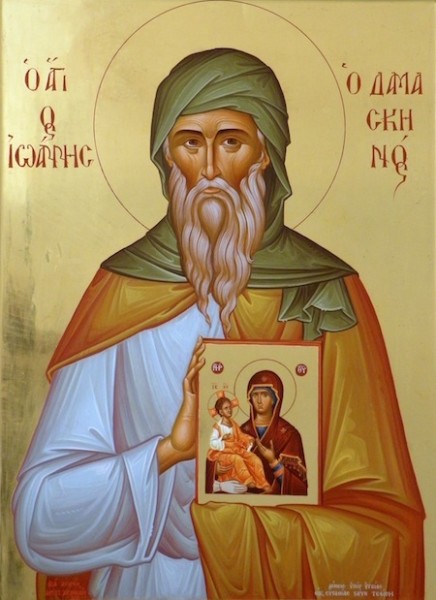 Here are some general characteristics of Icons (http://www.orthodoxinsight.com/icons/iconrules2.html)

Icons are often called 'windows to heaven' and because time and space are suspended in eternity, icons are two-dimensional (i.e. flat). There is no depth and event  s which occurred at different times in history are shown together.

The more spiritually important persons are usually larger in size to emphasize their status. There are no shadows since there is no darkness in heaven. The only variation in light appears in the halos that radiate from the holy persons represented (this illustrates that the spiritual light of grace which flows from the heart filled with the grace of the Holy Spirit rather than the floating halos of Western art). A lamp or candle is typically placed before the face to emphasize this glow.

Eyes are written large to show that the holy persons have seen God through faith. Ears are larger and mouths are smaller to emphasize the need to listen to God in silence. Saints face the viewer while others are in profile. Clothing and buildings sometimes reflect Byzantine style rather than first century Jerusalem. Bishop saints are distinguished by their vestments.

The traditional colors for icons are either color pigment in beeswax or egg tempera (the yolk of an egg mixed with an equal amount of water added to the pigment). Mounting on wood is standard. Modern methods often use acrylic (never oil) as well as mass-produced prints. This site contains extensive information on the process involved. Icons also vary slightly by style from country to country (Greek, Cretan, Russian, etc.) but basic rules remain the same.

The colors used in icons also have meaning:
Black: death and in other cases, evil
Blue: infinity and the spiritual world beyond the sky (dark blue is often used for Mary)
Brown: the material, mortal world
Gold: the divine nature of God (brightly radiating outward and dispelling all darkness)
Gray: never used because is a mixture of black and white (vague, unclear, 'lukewarm')
Purple: royalty
Red: Christ's resurrection, sacrifice and Christian martyrdom (the color of blood)
White: God's divine light, holiness and purity
Posted by The Rev. Rock Higgins at Wednesday, December 04, 2019