Collect:  O God of justice and compassion, you put down the proud and mighty from their place, and lift up the poor and the afflicted: We give you thanks for your faithful witness Jonathan Myrick Daniels, who, in the midst of injustice and violence, risked and gave his life for another; and we pray that we, following his example, may make no peace with oppression; through Jesus Christ the just one, who lives and reigns with you and the Holy Spirit, one God, for ever and ever. Amen.

Jonathan Myrick Daniels was born in Keene, New Hampshire, in
1939. He was shot and killed by an unemployed highway worker in
Hayneville, Alabama, August 14, 1965. 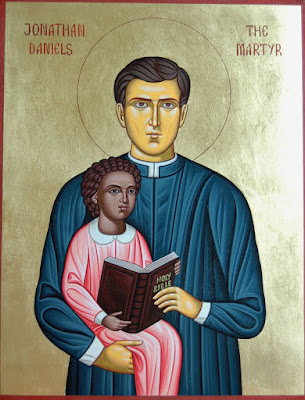 From high school in Keene to graduate school at Harvard, Jonathan
wrestled with the meaning of life and death and vocation. Attracted
to medicine, the ordained ministry, law and writing, he found himself
close to a loss of faith when his search was resolved by a profound
conversion on Easter Day 1962 at the Church of the Advent in Boston.
Jonathan then entered the Episcopal Theological School in Cambridge,
Massachusetts. In March 1965, the televised appeal of Martin Luther
King, Jr. to come to Selma to secure for all citizens the right to vote
drew Jonathan to a time and place where the nation’s racism and the
Episcopal Church’s share in that inheritance were exposed.

He returned to seminary and asked leave to work in Selma where he
would be sponsored by the Episcopal Society for Cultural and Racial
Unity. Conviction of his calling was deepened at Evening Prayer during
the singing of the Magnificat: “ ‘He hath put down the mighty from
their seat and hath exalted the humble and meek. He hath filled the
hungry with good things.’ I knew that I must go to Selma. The Virgin’s
song was to grow more and more dear to me in the weeks ahead.”
Jailed on August 14 for joining a picket line, Jonathan and his
companions were unexpectedly released after 6 days. Aware that they were in
danger, four of them walked to a small store. As sixteen-year-old Ruby
Sales reached the top step of the entrance, a man with a gun appeared,
cursing her. Jonathan pulled her to one side to shield her from the
unexpected threats. As a result, he was killed by a blast from the
12-gauge gun.

The letters and papers Jonathan left bear eloquent witness to the
profound effect Selma had upon him. He writes, “The doctrine of
the creeds, the enacted faith of the sacraments, were the essential
preconditions of the experience itself. The faith with which I went to
Selma has not changed: it has grown ... I began to know in my bones
and sinews that I had been truly baptized into the Lord’s death and
resurrection ... with them, the black men and white men, with all life,
in him whose Name is above all the names that the races and nations
shout ... We are indelibly and unspeakably one.”