Year C Easter 7 WED 2019 I Have Given You Authority

Collect: O God, the King of glory, you have exalted your only Son Jesus Christ with great triumph to your kingdom in heaven: Do not leave us comfortless, but send us your Holy Spirit to strengthen us, and exalt us to that place where our Savior Christ has gone before; who lives and reigns with you and the Holy Spirit, one God, in glory everlasting. Amen.

Luke 10:17-24
The seventy returned with joy, saying, “Lord, in your name even the demons submit to us!” He said to them, “I watched Satan fall from heaven like a flash of lightning. See, I have given you authority to tread on snakes and scorpions, and over all the power of the enemy; and nothing will hurt you. Nevertheless, do not rejoice at this, that the spirits submit to you, but rejoice that your names are written in heaven.”
At that same hour Jesus rejoiced in the Holy Spirit and said, “I thank you, Father, Lord of heaven and earth, because you have hidden these things from the wise and the intelligent and have revealed them to infants; yes, Father, for such was your gracious will. All things have been handed over to me by my Father; and no one knows who the Son is except the Father, or who the Father is except the Son and anyone to whom the Son chooses to reveal him.”
Then turning to the disciples, Jesus said to them privately, “Blessed are the eyes that see what you see! For I tell you that many prophets and kings desired to see what you see, but did not see it, and to hear what you hear, but did not hear it.”

I take my role very seriously. I talk about this very clearly with those in discernment looking at the priesthood, my faith is what had my teachers, mentors, pastors, and priests encouraged me to follow my calling into the pastorate and then into the priesthood. Jesus commissioned his closest followers, the Seventy, to go out and “practice” their faith. I use that word, “practice,” more in the professional sense, like doctors and lawyers, professions “practice.” It is so much more than “to try,” like in T-Ball, or any sport.

So they went out, and returning with joy, they report in to Jesus, “Lord, in your name even the demons submit to us!” I have that feeling sometimes, when this faith things actually works and people’s lives are changed and corrupt systems are changed. Faith is one thing, seeing it is no longer faith. It is Fact. So an underlying assumption for me is that what we are doing here and what we preach and teach, what we commission you to go out and do, is to “love and serve the Lord.” We all have something we can do to make the world a different place, a better place. The problem is we rarely take the time to do After-Action-Reviews, or Debriefs on how things went or are going. Jesus expects us to go out and do. Jesus expects us to make a difference. Jesus expects us to make a big difference in the world. That is the Gospel. To make, with God’s help,“On earth, as it is in heaven.”

On Sunday I wore this orange stole. I got lots of compliments on it. That was not my intent My plan was to share what it was for during our announcements, and I have to trust my gut when I hear the Spirit telling me clearly NO. Sunday, for whatever reason, was not the time. I cannot say more than that because that is all I know. This Blaze Orange stole is for Gun Violence Awareness. You may have heard about the Wear Orange campaign. If not, please speak with me, or Google it. “Wear Orange Day.” 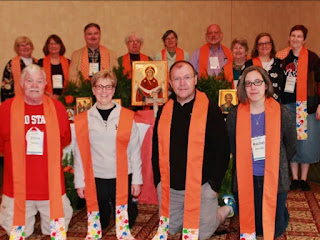 My friends from overseas ask me about what appears to be our national obsession with guns. They are very brazen about it. I have been asked,“It appears that you love your guns more than your children. Why?” And, “Why don’t you do something about it?”

Those are hard questions when it comes into context. Rarely can one have a rational conversation about any of this. For some, their fear of any firearm is terrifying and drives them to wish all of them taken and destroyed. On the other extreme, we have those who have made an idol of the Second Amendment. “A well regulated Militia, being necessary to the security of a free State, the right of the people to keep and bear Arms, shall not be infringed.” These words are treated as Holy Writ. While our founding documents were and are transformative in the world (as we are the oldest continuous democracy in the world), they are to be esteemed. They were never meant to be deified.

If Jesus’ Seventy could cast out demons, why do we hold back on addressing the demons of our society? No child should ever be shot. Especially at school. Period. No worker at the Municipal Center in Virginia Beach expected to not come home on Friday. They all should have been able to go home. Period. We gloss over the horror. It is too much. As Harrison said Sunday, this has become the new normal. In the name of Christ, I rebuke that. Not the fact of it, but existentially. I rebuke this in the name of Christ that our children, our brothers and sisters, our wives and husbands, our mothers and fathers must die on this altar.

Tomorrow we mark the 75th Anniversary of D-Day, the greatest single movement of coordinated military might in the history of the world going up against an evil system. That is what guns were made for. They are an evil, and in this world sometimes a necessary one. Tomorrow’s anniversary shows that well.

One time a Christian friend from college was bragging online about his new assault-style weapon online, just a few days after the Las Vegas mass shooting, glad about his right that he was exercising. All I could ask him was, “Who would Jesus shoot?” He even had an answer and named some people he thought Jesus would shoot. The only thing that came to my mind was the shortest verse in the Bible, “Jesus wept.” (John 11:35)

Now whenever I go out on a limb that creaks under the weight of a topic, inevitably someone winds up in my office saying that Politics does not belong in the pulpit. I would agree. Politicking should never be in the Church at all. But let us not confuse things. If our faith cannot address our culture, and culture is everything we swim in, TV and movies, music and art, education and poverty, social networking and social ills, we are a toothless tiger. We have become so worldly that we do not recognize the scope of God’s Kingdom in our lives or in our collective lives, our culture. You see, when the Church is being the Church the world confuses it for politics. We were sent to make the lame walk, the blind to see, the dead to rise again. And for the 12 in Virginia Beach I wish that I could do just that. This is within our scope and our power, in Jesus’ name and for his Glory. That is my second underlying assumption, we are here to be about God’s work in our world in God’s Name, and in God’s Authority, and in God’s Power.

Instead of Prayers of the People I would ask you to stand, as you are able, as I read the names of those shot and killed in Virginia Beach. Pray in silence or aloud as you are Spirit-led, and I will close in a collect.

O God of mercy, you sustain us with your grace as we live in a world which seems to abound in violence and hatred. Today our hearts are particularly heavy as we mourn the loss of life in Virginia Beach. We remember before you those whose lives were taken from them, those who have been injured and all who grieve. Thank you for the valiant and heroic intervention of all who acted to save the lives of the vulnerable. We pray, even plead, with you to deliver us from the temptation for vengeance, and be reminded that our Lord calls us to love our neighbors as ourselves. Give us the courageous and faithful resolve to bring about justice for all. Guide our hearts and minds with the ultimate vision of your peaceful kingdom, that we never lose sight of the day when we all may stand before you as true brothers and sisters. AMEN. (Bishop Jay Magness, Diocese of Southern Virginia)