Driving home from church a few Sunday nights ago, my daughter asked an amazingly cognizant question. "Why is St. Paul's where it is?"

We had just finished watching Traces of the Trade, a great documentary on the Slave Trade from the perspective of a family who owned slave ships, plantations in Cuba, and were ignorant that the family's wealth was so intricately woven with the trade. They were from the North, it was not their sin, or so they thought. My 10-year-old girl sat in silence, soaking it all in, both the movie and the Q&A with the director. I was duly impressed. This was going through her head when she asked about our church and its central location. 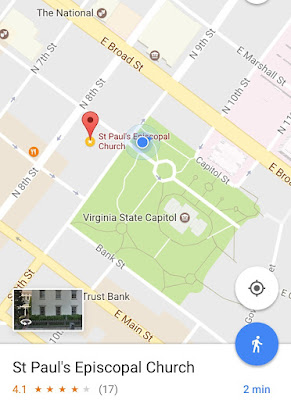 Having been a teacher, I knew better than to answer, and told her to answer her own question. She said it was pretty lucky to be where it is, next to the state Capitol building downtown, with the State Supreme Court behind our church, and City Hall a block away. I asked, "What kind of people would start a church 170 years ago in the middle of the city near so many important things?"

She responded, "Important people. And rich. They would have to be rich."

A part of me was beaming with pride, and part of my heart was breaking that this was a conversation we were having to have. "And where would people have gotten their money in Richmond 170 years ago, enough for them to build so beautiful a building in so important a spot?"

"People who got rich from slavery."

I had to say, "Yeah. Either directly or indirectly. Yeah. We have to admit that, and that conversation is one of the reasons we showed that movie tonight."

She nodded, thinking about it some more in silence.

After a little while I asked her about how all this made her feel. "Like the adults at the movie, I feel confused." I let her know that is okay. I love St. Paul's and she is getting to where she does, too. But it is confusing that some place with so many wonderful things about it can be birthed from such a place. Confusing, to say the least.

Since that night, I have repeatedly asked myself the question, "Why is St. Paul's here? Why then? Why now?"

So many other churches moved away from downtown. So many other people followed the population west. But St. Paul's did not. So that begs the question.

Why is St. Paul's here, today? I guess that is my job. To help make this place at this time known and relevant, and to fulfill the call of God for now, proclaiming the Gospel in the heart of our beloved RVA. "For such a time as this," says the Holy Book in Esther. May we live into the call of our time, and grow into the opportunity. When life and society (and history and heritage) throw us a curve, let's lean into it, and maybe even enjoy the ride.
Posted by The Rev. Rock Higgins at Friday, May 05, 2017